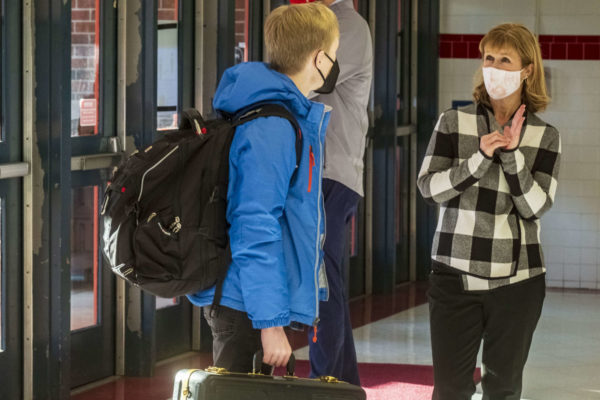 (Updated at 5:25 p.m.) Fairfax County Public Schools and six other school divisions, most of them in Northern Virginia, have sued to stop Gov. Glenn Youngkin’s order that makes face masks optional in schools.

As first reported by The Washington Post, the lawsuit was filed in Arlington Circuit Court this morning (Monday), asking the court for an injunction to stop Youngkin’s order from being enforced.

Collectively representing more than 350,000 students, the jurisdictions have all promised to continue requiring masks for students and staff, defying the executive order that Youngkin issued on Jan. 15, his first day in office, and was set to take effect today.

“The question for this Court is whether, by executive order, a governor can override both the Constitution of Virginia and a law enacted by the General Assembly,” the complaint says. “The School Boards respectfully submit that the answer to this question is no.”

In a joint statement, the suing school divisions say they’re seeking to defend “the right of school boards to enact policy at the local level, including policies that protect the health and well-being of all students and staff”:

This legal action centers on fundamental questions about the framework of public education in Virginia, as set out in the Virginia Constitution and by the General Assembly. At issue is whether locally elected school boards have the exclusive authority and responsibility conferred upon them by Article VIII, § 7 of the Constitution of Virginia over supervision of the public schools in their respective communities, or whether an executive order can unilaterally override that constitutional authority.

Also at issue is whether a governor can, through executive order, without legislative action by the Virginia General Assembly, reverse a lawfully-adopted statute. In this case, Senate Bill 1303, adopted with the goal of returning students to safe in-person instruction five days a week in March 2021 and still legally in effect, provides that local school boards should follow The Centers for Disease Control and Prevention (CDC) health and safety requirements.

Without today’s action, school boards are placed in a legally untenable position — faced with an executive order that is in conflict with the constitution and state law. Today’s action is not politically motivated. These seven school divisions would welcome the opportunity to collaborate with the governor to ensure the safety and welfare of all students.

This lawsuit is not brought out of choice, but out of necessity.

With COVID-19 transmission rates high, our hospitals at crisis level, and the continued recommendation of health experts to retain universal mask-wearing for the time being, this is simply not the time to remove this critical component of layered health and safety mitigation strategies. School divisions need to continue to preserve their authority to protect and serve all our students, including our most vulnerable, who need these mitigation measures perhaps more than anyone to be able to continue to access in-person instruction.

FCPS Superintendent Scott Brabrand reaffirmed the division’s commitment to maintaining a mask requirement due to the spread of COVID-19 in a message to the community on Friday (Jan. 21), citing state law and a regulation that made masks part of the dress code, as of Aug. 20.

“We are working towards a day when we can begin to roll back these safety measures, including universal masking,” Brabrand said. “But for right now, we must continue to protect and serve all our students, including our most vulnerable. More than anything else, these mitigation measures allow them to safely remain in our schools.”

Good Monday evening! Today we published 9 articles that were read a total of 11511 times on FFXnow alone, so far. 📈 Top stories The following are the most-read articles…

A person has been hospitalized after a reported shooting in Groveton. Fairfax County police officers are currently at the scene in the 7100 block of Fairchild Drive. According to the…

Fairfax County has made some progress over the past decade in introducing public amenities to support its growing community in Tysons. Since adopting its Tysons Comprehensive Plan in 2010, the…

Cinnamon roll lovers can soon get their fix, as a new gourmet shop opens in Herndon. Cinnaholic plans to open at the Village Centre at Dulles (2451 Centreville Road) this…