(Updated at 3:40 p.m.) A carjacking in Groveton led to a police pursuit that concluded near the Capital Beltway this morning, Fairfax County police say.

Fairfax County Police Department officers have arrested an individual who they believe is responsible for a carjacking that occurred this morning at the intersection of South Kings Highway and Woodstone Place.

When the officers located the stolen vehicle, they were led on a chase along I-95/I-495, according to the department.

Charges are now pending for the suspect, who was armed, police said. The man had carjacked a Honda in D.C. before traveling to Fairfax County and taking the Chevy Tahoe that was involved in the pursuit.

“Officers remain on scene and are working to clear the roadway,” the FCPD said.

UPDATE: Suspect in custody. Officers remain on scene and are working to clear the roadway.

Carjacker arrested! This man carjacked a Honda in DC, drove into Fairfax, carjacked the owner of a Chevy Tahoe & took off, leading officers in a pursuit across the Beltway. Our officers were able to stop him & safely take him into custody. Charges pending. Great job #FCPD pic.twitter.com/kWBg4sPRsT

A man allegedly fired gunshots outside Hutchinson Elementary School near Herndon before fleeing police and getting into a crash on the Dulles Toll Road.

Fairfax County police officers were called to the school for a report of shots being fired into the air around 4:09 p.m. today, according to Fairfax County Police Department Lt. Dan Spital.

When officers arrived at the school, they saw a group of men behind the school, one of whom ran through a wooded area — presumably the adjacent Hutchinson Park — and onto the Dulles Toll Road, police said.

“Once that man got onto the Dulles Toll Road, he was struck by a vehicle,” Spital said in a brief update around 6:30 p.m. “That vehicle remained on scene, and the patient was listed in critical condition. He was ground-transported to a local hospital, where he’s being treated for injuries that are still considered life-threatening.”

K9 officers found a firearm in the woods on the path where the foot chase took place, according to police.

Watch as Lieutenant Dan Spital provides an update to the community about this afternoon’s shooting at Hutchison ES. Follow our blog, https://t.co/lhGv3NDvYs, for any available updates. #FCPD pic.twitter.com/grt134nWOa

A 27-year-old man was arrested in West Falls Church last night after fleeing from and shooting at police officers and troopers in both Fairfax and Arlington counties.

The center was still busy when the shooting occurred around 8:30 p.m., but no injuries were reported to police, bystanders, or the suspect, according to Davis. One officer with the Fairfax County Police Department fired their gun.

“There’s restaurants here, there’s gas stations here. We’re early enough in the night that there’s pedestrians. There’s folks walking around,” Davis said. “It’s an absolute miracle that no one was struck and injured or killed, and we’re very, very grateful for that.”

Arlington law enforcement first encountered Singleton around 9 a.m. yesterday when he motioned over Arlington sheriff’s deputies to his vehicle, which was parked in front of the Arlington County Courthouse, FFXnow’s sister site ARLnow reported.

“When the deputies came over to the vehicle, they noticed that the person had a firearm in his possession, and shortly after that the gentleman drove off,” Arlington County Police Chief Penn said.

Suspect in custody. Officers are in the area of Arlington Blvd/Graham Rd after a man fled a traffic stop from @ArlingtonVaPD. Suspect reported to have fired shots at police. No injuries reported to officers or to suspect. #FCPD took man into custody. More to follow. pic.twitter.com/37QWnON5VR

The deputies came across the vehicle again in a nearby garage. The driver “mentioned something about needing help,” but after the deputies approached and saw the firearm, the man again drove off, this time crashing into a parked vehicle, police say.

According to Penn, ACPD identified Singleton as the suspect and obtained warrants for eluding, brandishing, and hit-and-run. END_OF_DOCUMENT_TOKEN_TO_BE_REPLACED

A driver nearly hit one vehicle, rammed into a Virginia State Police trooper’s vehicle, and crashed into a third vehicle head-on during a police pursuit last night (Thursday) that extended from I-395 in Arlington to South Kings Highway in Groveton.

According to state police, a trooper saw a vehicle headed northbound on I-395 nearly hit another vehicle traveling in the same direction around 10:27 p.m. yesterday. When the trooper attempted to make a traffic stop, the vehicle instead “sped away,” a news release says.

As the pursuit continued east onto the Capital Beltway (I-495), the trooper learned that Fairfax County police were searching for the vehicle in question, which had been reported stolen in the county.

After exiting the Beltway, the chase turned onto South Kings Highway. As it neared Telegraph Road, the pursued vehicle “struck the raised median and crossed into oncoming traffic where it struck head-on another vehicle,” according to the news release.

“The impact of the crash caused the suspect vehicle to overturn twice before coming to rest on its side,” state police said.

The pursued vehicle’s driver, an adult man, was transported to Fairfax Inova Hospital for treatment of injuries that VSP described as serious, while the driver of the vehicle that was hit went to the hospital with minor injuries.

No injuries to state police were reported.

An investigation into the incident is underway with charges forthcoming, VSP said.

(Updated at 10:15 a.m. on 9/2/2022) Fairfax County police have arrested four people after chasing a vehicle on Route 1 that was allegedly stolen.

The north left shoulder, left lane, and center lane of Route 1 (also known as Richmond Highway) were closed today (Thursday) at the Fort Hunt Road intersection in Belle Haven, just south of the Capital Beltway, according to the Virginia Department of Transportation’s traffic information site.

According to the county police department, an officer spotted a vehicle going north on Route 1 that had been reported stolen in a Prince George’s County carjacking. When the officer attempted a traffic stop near Fort Hunt Road, the “car did not stop and continued to drive away,” a spokesperson said.

The resulting pursuit ended in the Huntington Avenue area when the officer deployed a Precision Immobilization Technique, a manuever for stopping high-speed vehicles that the FCPD pioneered but has been criticized as risky.

The move prompted the car to roll over into southbound Route 1 traffic, police told FFXnow.

Four occupants of the vehicle were taken into custody and transported to a hospital with injuries not considered life-threatening, according to police. No officers were injured.

The FCPD is advising community members to avoid the area.

The department will identify those arrested — all of them adults — and announce charges tomorrow (Friday).

A Maryland driver has been arrested after leading police on an extended chase down the Capital Beltway yesterday (Monday) that crossed state lines and ended with a car flip in Tysons.

According to Montgomery County police, its officers were on the lookout for 26-year-old Frederick K. Njihia of Germantown after getting a report of a man shooting a rifle at people, including a local sanitation worker whose vehicle was hit multiple times.

No one was injured in the shooting, which occurred around 9:20 a.m., the Montgomery County Department of Police said.

The pursuit began when an officer spotted a blue Honda Civic matching the reported description of Njihia’s vehicle. Njihia shot at the police cruiser, flattening a front tire, and other officers pursued him on southbound I-270, police said.

A police pursuit that began in a Germantown neighborhood after a Montgomery County Police officer was shot at came to an end in Fairfax, Virginia. No police officers or citizens were injured during this pursuit. The suspect is in custody.
Video Credit : Spencer Deese#mcpnews pic.twitter.com/OHr7VFeRWa

Virginia State Police were notified about the pursuit at approximately 9:41 a.m. and took over once it crossed the American Legion Bridge and entered the state, according to a VSP news release.

Once the Honda Civic passed into Virginia on I-495, it exited onto Route 7 towards Tysons Corner. When it did a U-turn on Route 7 at Route 267/Dulles Toll Road, a Virginia State Police trooper administered a pursuit intervention technique by making contact with the suspect vehicle. The Honda Civic ran off the road, struck the Jersey wall, and overturned onto its roof.

With a pursuit intervention technique, also known as a precision immobilization technique or PIT manuever, police stop a vehicle by running into its rear, causing it to turn and often flip. The move has been the subject of some debate over its safety.

NEW: The end of a lengthy chase from Montgomery Co. to Tysons on Rt 7 at 267. @VSPPIO ended it by purposely crashing into the vehicle with a PIT (pursuit intervention technique) after suspect made a U-turn on 7. #police @CordellTraffic @RealTimeNews10 @marykimm @TomJackmanWP pic.twitter.com/twSbGzprb5

POLICE CHASE: Montgomery County police say a man w/ a gun in Germantown fired shots at an officer, then led them on a chase down 270, over the American Legion Bridge onto 495, then onto route 7 and crashed in the Tyson’s area. We can see the car flipped upside down @nbcwashington pic.twitter.com/A2ukN2g0Zn

The crash closed all east and westbound lanes on Route 7 and required a medical response, according to the Virginia Department of Transportation. Virginia State Police reported that Njihia was transported to Inova Fairfax Hospital “for treatment of minor injuries sustained when his vehicle overturned.”

The VSP has charged Njihia with eluding police, a felony, and reckless driving, a misdemeanor. He’s currently being detained without bond at the Fairfax County Adult Detention Center.

Njihia also faces four counts of attempted murder and a count of first-degree assault with a firearm in Maryland. 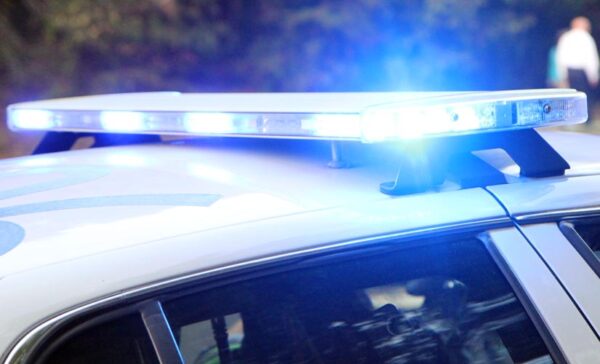