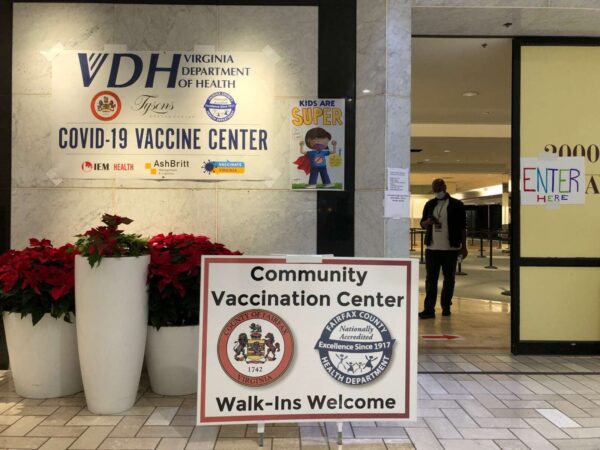 With 267 new cases reported today (Monday), the Fairfax Health District, which includes the cities of Fairfax and Falls Church, is averaging 448 cases per day for the past week, a steep decline from the seven-day average of 2,590 cases recorded when the omicron variant-fueled surge peaked on Jan. 13.

The current seven-day average is the lowest that the district has seen since Dec. 20, when it was at 403 cases, according to Virginia Department of Health data.

The level of community transmission is still considered high, though, with the county seeing 293 new cases per 100,000 people and a 8.5% testing positivity rate for the week of Jan. 30 through Feb. 5.

In total, 172,751 district residents have contracted the coronavirus during the pandemic. Covid has put 4,424 people in the hospital, and killed 1,333 people, including 52 deaths reported since last week.

The majority of those deaths likely occurred in January due to the time it takes for deaths to be reported and the cause confirmed. VDH said on Friday (Feb. 4) that it was just starting to receive an influx of death certificates related to the omicron surge.

VDH added in the news release that “the best defense against COVID-19 infection, hospitalization and death remains vaccination.”

As of Jan. 17-29, the Covid infection rate in Virginia was 4.7 times higher for people who aren’t unvaccinated compared to those who have gotten at least two doses of the Pfizer or Moderna vaccines, or the one-shot Johnson & Johnson vaccine.

According to the Fairfax County Health Department, 90% of all Fairfax Health District residents 18 and older have received at least one vaccine dose, as of today.

At least one dose has been administered to 954,019 residents overall, or 80.6% of the population, including:

Seven restaurants in Fairfax County are part of this year’s Washingtonian’s 100 Very Best Restaurants list. The restaurants that earned a coveted spot include: A&J Restaurant in Annandale Aracosia in…

A preview of summer at Wolf Trap National Park for the Performing Arts has arrived. More than 50 artists have been scheduled for the upcoming season at the Filene Center…

Jos A. Bank has officially closed its doors in Reston Town Center. A primary care practice — One Medical — will take over the former location of the men’s clothing…

Laura Schwartz is a licensed Realtor in VA, D.C. and MD with McEnearney Associates in Vienna. You can follow Laura on Instagram at @LauraSchwartzRealtor or her Facebook page. Laura can be reached at 703-283-6120 or Laura@GuidingYourMove.com. The…