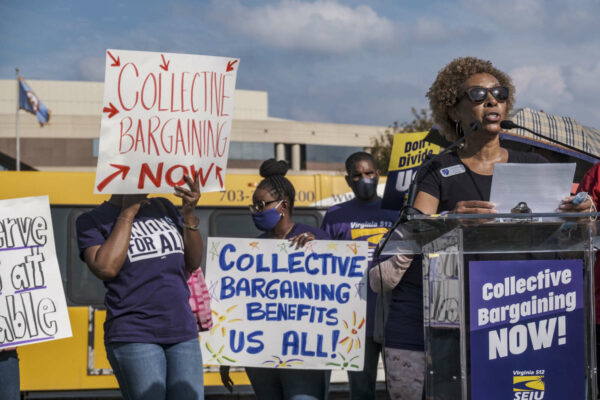 Although unions can move ahead with elections now, groups appear content to wait for the labor relations administrator to be in place.

“The labor relations administrator will be the neutral person, so they don’t work for us. They don’t work for any of the employee groups,” Fairfax County Human Resources Director Cathy Spage told the Board of Supervisors Tuesday (Feb. 1) at a Personnel and Reorganization Committee meeting. “They’re going to be like a judge.”

The person will be tasked with establishing and publishing union vote procedures and overseeing secret ballot elections, among other duties. Fairfax County government plans to use a contractor for the position and will accept proposals from Wednesday (Feb. 9) through March 9.

The Board of Supervisors could approve the new position on May 24, allowing the administrator to start this summer for a four-year term.

The county approved a historic ordinance in October allowing public-sector unions to negotiate wages, benefits, and working conditions on the behalf of county government employees.

The move was made possible by a 2020 General Assembly law that overruled a 1977 state Supreme Court decision barring public workers from collective bargaining.

According to the ordinance, if a union seeks to hold an election before the labor relations administrator is in place, the county would secure services from an impartial agency provider, such as the American Arbitration Association or another group.

As of Tuesday (Feb. 1), no union filings have begun. Units representing police, fire and general county government employees will be allowed to collectively bargain.

Following an election, a union acting as the exclusive bargaining agent must start contract negotiations on or before July 1 and conclude by Oct. 15 in order for an agreement to be in place for the next fiscal year.