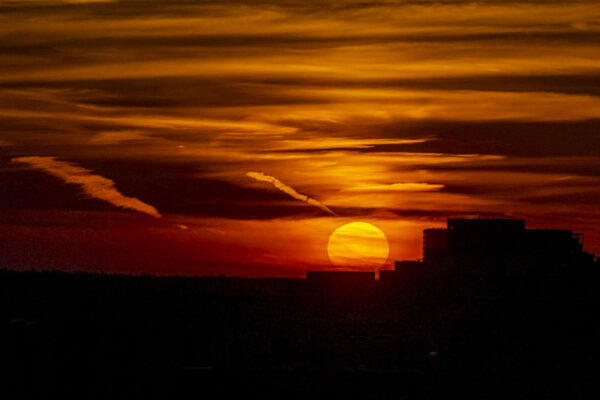 As climate change intensifies, Fairfax County residents could see searing temperatures increase, turning most summer days into scorchers by the end of the century.

That’s just one of the data-based predictions from a “Climate Projections Report” that the Fairfax County Office of Environmental and Energy Coordination released last Thursday (Feb. 10).

“The new climate projections report is a stark reminder that we are likely to experience serious and significant changes as a result of greenhouse gases warming our world,” Kambiz Agazi, director of the county Office of Environmental and Energy Coordination, said in a statement.

Currently, Fairfax County averages about a week’s worth of days at or above 95 degrees. The future depends on how effectively the world curbs greenhouse gas emissions.

If the average global atmospheric carbon dioxide level more than doubles from 2020 to 2100, however, that higher-risk trajectory puts the county at over a month’s worth of 95-degree days by 2050 and over  two months’ worth by 2085.

The report also forecasts that the county will see stronger rains as well as a drastic drop in the number of snow days — from around nine days per year to three days or fewer by the end of the century.

“Regardless of which future scenario best aligns with our trajectory, Fairfax County’s governance of assets, systems, and population is likely to be strained if the county is not adequately prepared for these plausible futures,” the report said.

The Office of Environmental and Energy Coordination developed the report as part of its Resilient Fairfax initiative to find strategies and a roadmap for responding to climate problems.

It was accompanied by a NASA report that found ground or pavement temperatures can be as much as 47 degrees higher in urbanized parts of the county compared to undeveloped, forested areas.

A survey conducted for the Resilient Fairfax initiative indicated that residents are already concerned about the impact of severe storms, rising temperatures, and other repercussions of climate change, according to results released in November.

“From stronger storms to longer stretches of extreme heat and humidity, Fairfax County is not immune to the effects of climate change and this report is a crucial piece of the puzzle as we prepare our community to be more resilient in the future,” Agazi said.