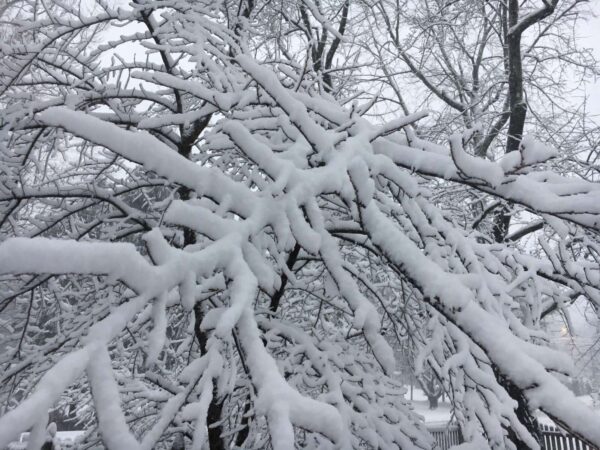 Updated at 12:25 p.m. — Firefighters are warning about dangerous conditions and fire due to downed wires as power company workers respond.

Fairfax Connector has suspended bus service due to the “deteriorating road conditions” caused by the ongoing snowstorm. Buses currently in operation will complete their routes.

Earlier: Fairfax County’s first snow of the season started falling early this morning (Monday) and has kept up a steady pace ever since, making roads hazardous while closing schools and many office jobs.

Heavy snow is expected with 5 to 10 inches accumulating, according to an updated National Weather Service winter storm warning for Fairfax County and much of the D.C. region that began at 1 a.m. and will continue through 4 p.m.

The heaviest amounts are projected to fall near and south of Route 50, with heavier snow running through the early afternoon, the NWS predicted.

“State plows are now on the roads,” Fairfax County said around 8:50 a.m. on Twitter. “If you’re out driving, please give them space.”

The Virginia Department of Transportation now has a website that allows users to track the progress of its snow plows.

As of 8 a.m. Virginia State Police responded to 82 traffic crashes across the Commonwealth and advised people to stay off roads.

#VSP's responding to 82 traffic crashes across #Virginia as of 8 AM 1/3/22. No injuries, just stuck/damaged vehicles caused by folks going too fast for conditions. Pls stay off the roads. Limit travel only if necessary. Photo of Rte 29 at Rte 15 in #Culpeper Co. @VaDOTCULP pic.twitter.com/L4hDaSVOdm

The Fairfax County Police Department reported that several roads had been closed due to snow as of 11:30 a.m., including:

A resident reported around 8:40 a.m. that several vehicles were stuck on Richmond Highway in the Alexandria section of Fairfax County.

Richmond Hwy in the Alexandria section of Fairfax county is a hot mess right now. It appears it hasn’t been treated at all and several vehicles are stuck and idle. @nbcwashington @AdamTuss @capitalweather @VaDOT pic.twitter.com/pVzSS03HS3

Federal and local government offices have been closed for the day. The Fairfax County government closures include the courts, all Park Authority facilities and programs, and COVID-19 vaccination sites.

After announcing last night (Sunday) that schools would be closed to students with no virtual learning, Fairfax County Public Schools expanded its closure this morning to include all offices and COVID-19 testing sites.

The snow is affecting transit as well as drivers. While trains are currently operating as usual, Metro has now suspended bus service “due to rapidly deteriorating weather and hazardous road conditions throughout the region.”

“All buses currently in operation with customers will operate to the end of the line to complete their routes if safe to do so,” the Washington Metropolitan Area Transit Authority said. “All other buses will hold at stops until roads are passable and safe to resume service.”

Metrorail remains in operation. De-icer trains and heaters have been deployed in an effort to keep rail lines free of snow and ice.

“Metro customers should allow additional travel time and use caution on platforms, escalators, parking lots and other areas that may be slippery,” WMATA said in a news release last night. “Metro will have plows and equipment deployed throughout the system to clear and treat parking lots, walkways and platforms.”

END_OF_DOCUMENT_TOKEN_TO_BE_REPLACED

More Stories
New Year’s 2022: What will be open and closed in Fairfax CountyFCPS will be closed tomorrow as widespread snowfall upends traffic, power grid